Our Books
Click image to view on Amazon, book summaries found below. 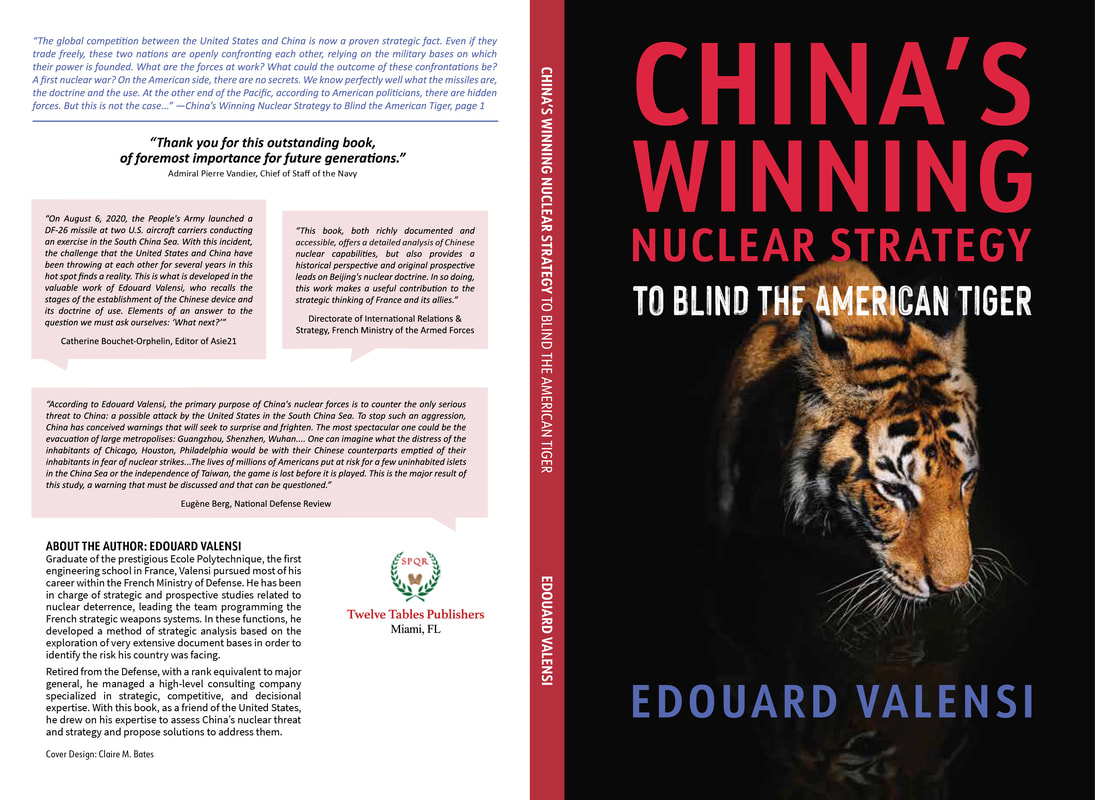 Author Edouard Valensi had a well-established successful career with the French Ministry of Defense and is now retired. His rank is equivalent to major general, and he managed a high-level consulting company specializing in strategic, competitive, and decisional expertise. With this book, as a friend of the United States, he drew on his expertise to assess China’s nuclear threat and strategy and propose solutions to address them.

From the book's introduction, "The global competition between the United States and China is now a proven strategic fact. Even if they trade freely, these two nations are openly confronting each other, relying on the military bases on which their power is founded. What are the forces at work? What could the outcome of these confrontations be? A first nuclear war? On the American side, there are no secrets. We know perfectly well what the missiles are, the doctrine and the use. At the other end of the Pacific, according to American politicians, there are hidden forces. But this is not the case. For more than ten years, China’s military has been speaking out. Its publications have celebrated the extraordinary first moments of Chinese nuclear weapons, and complacently report on what they are today and what they could be in fifteen years’ time." --page 1.

“This book, both richly documented and accessible, offers a detailed analysis of Chinese nuclear capabilities, but also provides a historical perspective and original prospective leads on Beijing's nuclear doctrine. In so doing, this work makes a useful contribution to the strategic thinking of France and its allies.” Directorate of International Relations & Strategy, French Ministry of the Armed Forces 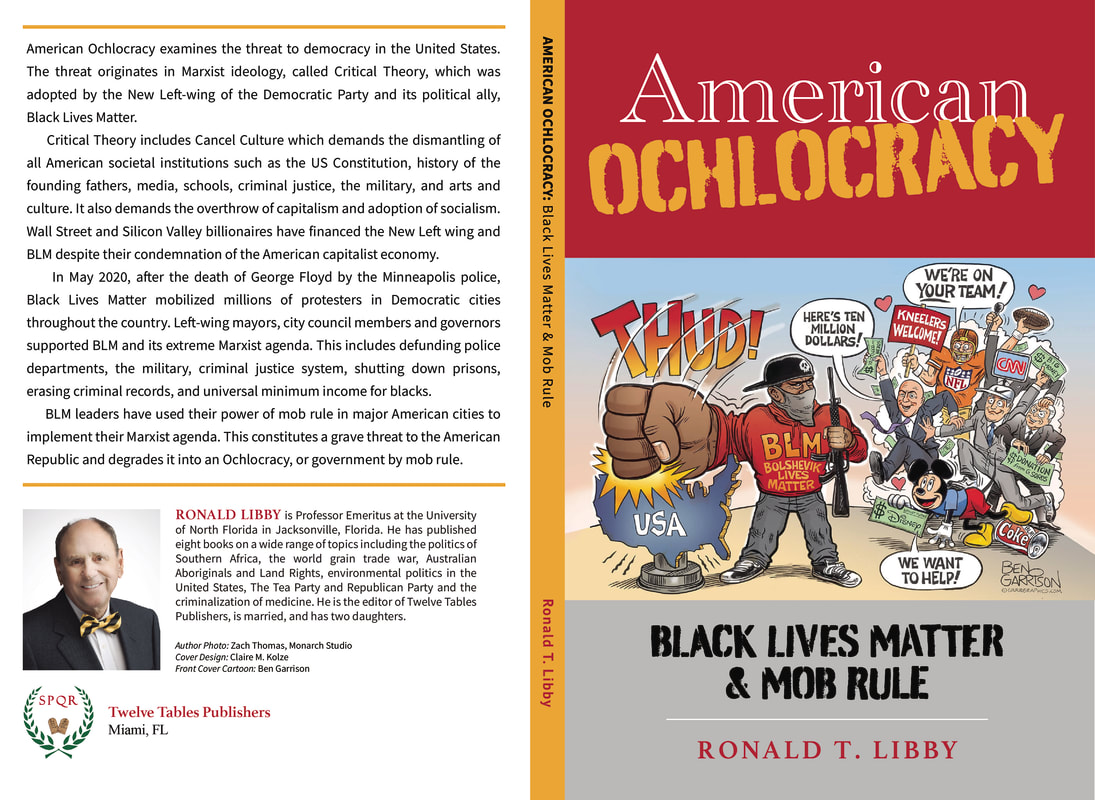 American Ochlocracy examines the threat to democracy in the United States. The threat originates from Marxist ideology called Critical Theory which was adopted by the New Left-wing of the Democratic Party and its political ally, Black Lives Matter. The book traces Critical Theory from the founding of the Institute for Social Research an adjunct of the University of Frankfurt in 1923 and then in exile at Columbia University in New York City from 1935-1949 before returning the Germany in 1949. A handful of brilliant Critical Theory Scholars published revolutionary Marxist books and articles that profoundly influenced the New Left movement of the United States and Western Europe in the 1960s and 1970s. The most influential Critical Theorists are Herbert Marcuse and Theodor Adorno. They are the intellectual founders of the revolutionary student movement in the 1960s and 1970s and the latest BLM movement of the 2020s.

​The Left-wing of the Democratic Party and Black Lives Matter have adopted the Critical Theory doctrine. The American Communist ideologue, Angela Davis, was a student of Herbert Marcuse in the 1960s and 1970s and she is an advisor to the principal founder of BLM, Patrisse Cullors. Critical Theory includes Cancel Culture which demands the dismantling of all American societal institutions such as the US Constitution, history of the founding fathers, media, schools, criminal justice, the military, and arts and culture. It also demands the overthrow of capitalism and adoption of socialism. Wall Street and Silicon Valley billionaires have financed the Left-wing and BLM despite their condemnation of the American capitalist economy.

In May 2020, after the death of George Floyd by the Minneapolis police, Black Lives Matter mobilized millions of protestors in Democratic cities throughout the country. Many of the protests degenerated into deadly riots that led to deaths, looting, arson and destruction of thousands of buildings and business districts. Instead of controlling rioters, Left-wing governors, mayors and city council members ordered the police to stand down and allow the wanton destruction to continue for months. They also supported BLM's extreme, Marxist agenda. It includes defunding police departments, the military, criminal justice system, shutting down prisons, erasing criminal records, releasing rioters without bail or a hearing and giving reparations and guaranteed minimum income to blacks. BLM leaders have used their power of mob rule in major American cities to implement their Marxist agenda. This constitutes a grave threat to the American Republic and has the potential to degrade the country into an Ochlocracy, or government by mob rule. 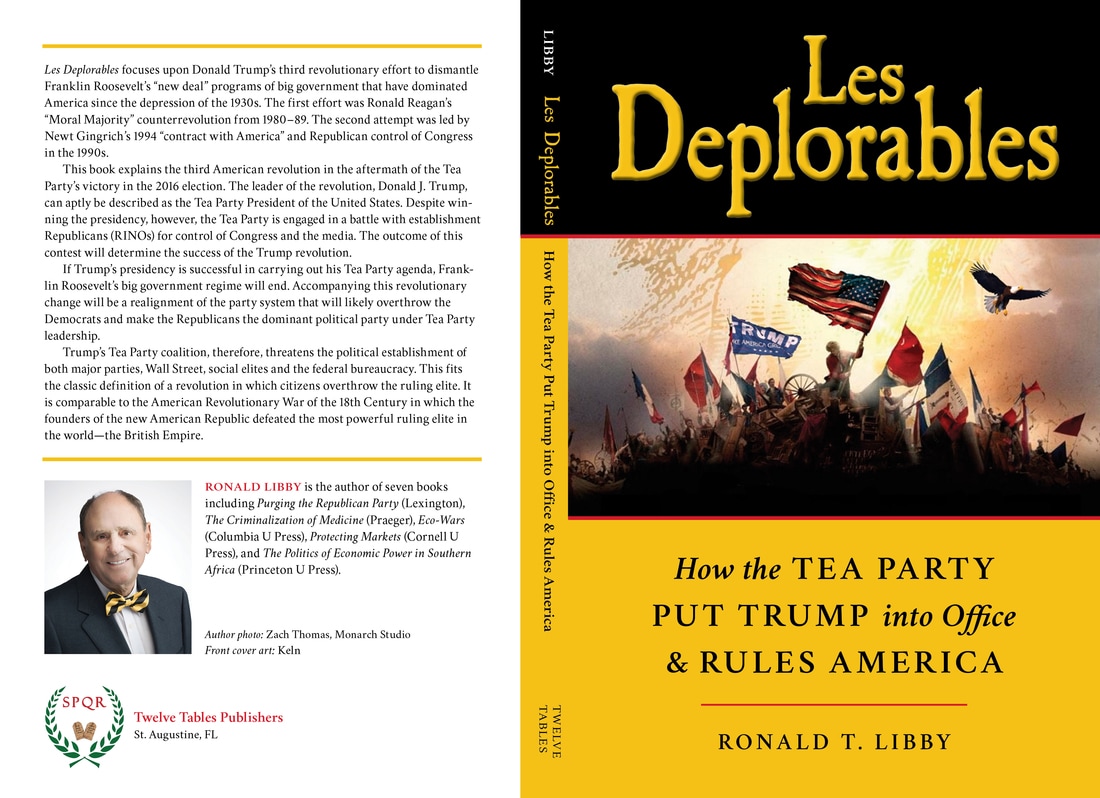 ​​​​​​
The book focuses upon Donald Trump's third revolutionary effort to dismantle Franklin Roosevelt's "new deal" programs of big government that has dominated America since the depression of the 1930's--85 years ago. The first revolution was Ronald Reagan's "Moral Majority"  counterrevolution from 1980-89. The second attempt was led by Newt Gingrich's 1994 "contract with America" and Republican control of Congress in the 1990s. While the first two revolutions made inroads dismantling the federal bureaucracy from the top down, they ultimately failed because they did not have the sustained power necessary to transform government and society. Trump's effort is deeper and more powerful than the first two revolutions.

Trump has the support of a massive bottoms-up grassroots movement--the Tea Party which was inspired by the original American Independence Tea Party movement of 1773. In all three cases, the ruling elite opposed the reforms, public opinion polls supported them and the media was hostile to the revolution. Nevertheless, under Tea Party leadership, the American people attempted to assert control over a corrupt and arrogant political establishment.

The book explains the third American revolution in the aftermath of the Tea Party’s victory in the 2016 election. The leader of the revolution, Donald J. Trump, can aptly be described as the Tea Party President of the United States. Despite winning the presidency, however, the Tea Party is engaged in a battle with establishment Republicans (RINOs) for control of Congress and the media. The outcome of this contest will determine the success of the Trump revolution.

Trump’s agenda is also the Tea Party’s agenda. If Trump’s presidency is successful in carrying out his agenda, Franklin Roosevelt's big government regime will end. Accompanying this revolutionary change will be a realignment of the party system that will overthrow the Democrats and make the Republicans the dominant political party under Tea Party leadership.

Trump's Tea Party coalition, therefore, threatens the political establishment of both major parties, the federal bureaucracy, Wall Street, social elites, and the federal bureaucracy. This fits the classic definition of a revolution in which citizens overthrow the ruling elite. It is comparable to the American revolutionary war of the 18th Century in which the founders of the new American Republic defeated the most powerful ruling elite in the world--the British Empire.